Tuesday Evening December 3rd – Next system on the way

Not until we enjoy a quiet Wednesday

JOPLIN, Mo. — Good Tuesday, evening, everyone. Our day started out with mostly cloudy skies, but we eventually saw the sun brighten things up this afternoon. In addition, we saw temperatures climb into the lower to middle 50s this afternoon after our cold start this morning. The evening started out with mostly clear skies and that plans on sticking around through the night. As a result, we won’t have anything on the radar below to worry about tonight…

We’ll turn cold again tonight with lows dropping back into the middle 30s under mostly clear skies. Through the day ahead of us, we’ll have partly sunny skies return ahead of our next storm system coming from the west… 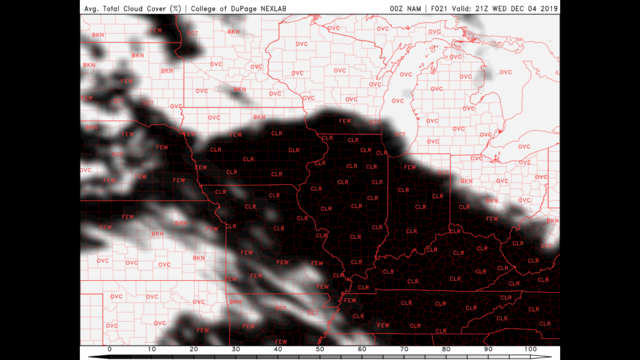 Even with the cloud cover picking up through the day, highs on Wednesday look pretty good as we’ll top out in the middle to upper 50s… 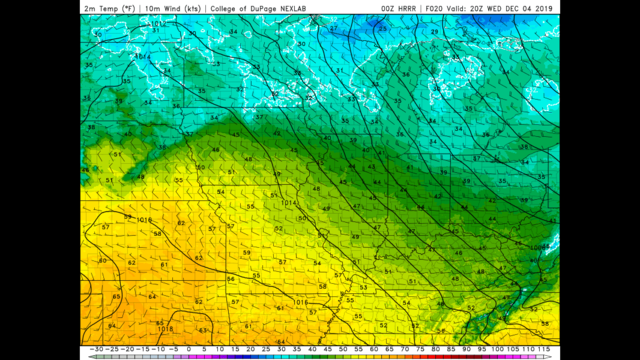 The skies will turn mostly cloudy as we roll into Thursday. Most of the day will be dry, though. Once we get into the late afternoon and especially the evening, that’s when a little activity will pick up as the system continues to work on through… 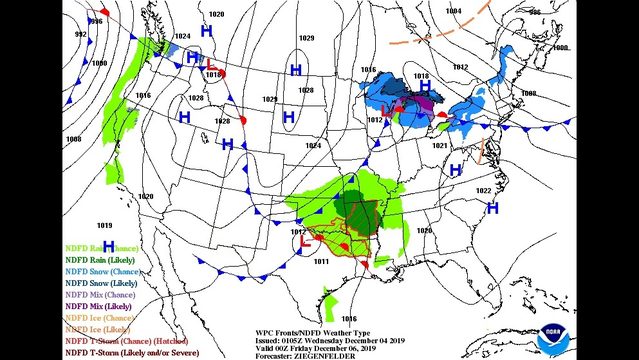 By late Thursday afternoon and evening, this system will give us some scattered showers across the region. There is a chance for some of those showers to stick around as we head into early Friday morning below, but the AM drive for Friday looks dry as the system clears out… 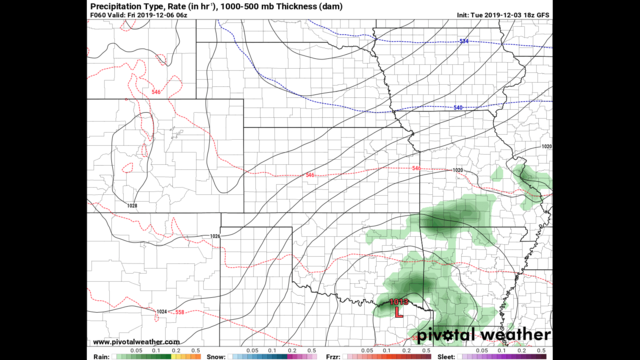 If you’re curious as to how we look for the rest of the week and the rest of the month, Doug put out his month-long forecast last night. If you missed it, you can catch it below…

Don’t forget that Doug also has your long range forecast into next January down below. Have a good night and a great Wednesday!

Next Week: A system develops right on top of us and mainly just east of us on Sunday. We will have several in this pattern that seem to get going just a hair east of the region. So showers chances on Sunday and Monday, turning much cooler as well. Mainly a cold to cool week with rain and snow chances on Thursday and Friday.

December 15th – 21st: Next storm system rolls in on Monday and Tuesday. This will give us rain chances with much colder temperatures for the rest of the week. Rain and snow chances return on Thursday.

January 5th – 11th: Rain, snow and ice chances to start the week. Then mainly cold again with rain and snow chances on Thursday. A fast wave over the weekend with a few rain or snow showers.

January 12th-18th: A cool start to the week with mild temperatures for the middle of the week. A weak mid-week wave with a few showers. Bigger system moves in by the weekend.

Remember that you can sign up for WeatherCall by clicking the WeatherCall link at the top of the page. WeatherCall, in our opinion, is the best tool on the market to keep you safe during severe weather.

Also, we have our free WEATHER APP that lets you access our forecast, blog, radar and weather alerts. We think it’s a must if you own an Apple or Android phone.

Catch local, special coverage of the Chiefs and Chiefs Kingdom

WHO says virus death rate is about 2 percent