JOPLIN, Mo. — Bystanders allege a group of Missouri Southern State University students heckled visitors at Saturday’s football game. The MSSU students were sitting in a section of bleachers on the visitor’s side.

MSSU officials say they are looking into what exactly transpired during the game and released the following statement today:

“Missouri Southern State University was made aware over the weekend of inappropriate behavior by some if its students seated on the east side of Fred G. Hughes Stadium during Saturday’s Homecoming game. The University finds the behavior described by our guests as inappropriate and unacceptable and we offer our sincere apology to the fans, coaching staff and student athletes of the University of Central Missouri.

The incident is under review by the University and has already been discussed with student advisory groups and staff in intercollegiate athletics and student affairs. Missouri Southern firmly believes the actions of its employees, students and fans should represent the University’s values. It is the University’s intent to use Saturday’s incident as a learning experience for all involved and to move in a positive direction both for the reminder of the football season and beyond.

A woman who witnessed the incident took a photo of students cleaning up litter on the bleachers afterwards. She says the students who were cleaning up were not involved and actually set an incredible example (photo below). 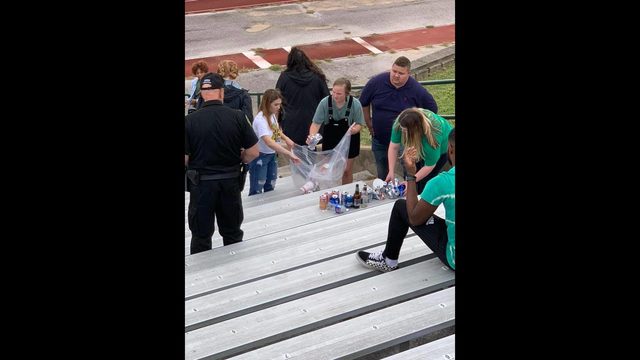