Landon Carlson takes the trip of a lifetime

The EoE patient isn't letting anything stop him.

ANDERSON, Mo — Anderson, Missouri is home to the Carlsons. Libby, Alex, Kaylie, Jace, Ruby the dog, Shelly the turtle, and of course Landon.

Landon: …and I have a joke about turtles.
Jesse: Alright, hit me.
Landon: What is a turtle’s favorite type of picture?
Jesse: (thinks) What?
Landon: A Shell-fie.
Jesse (laughing)
Landon: Get it? A Shell-fie?

Landon is a rare kind of kid with a rare disease, so rare in fact, he uses it as an ice breaker.

Landon: Every time I find somebody new, I tell them, “Hey can you say Eosinophilic esophagitis?” and they’re like, “Eosino-uhhhh… Eosin…”

Libby (Landon’s Mom): The way she acted was almost like it was a cancer diagnosis. It was pretty scary, but I guess that’s because it’s pretty rare.

Alex (Landon’s Dad): He gets the diagnosis of the Eosinophilic esophagitis, and then he also has something called Ehlers Danlos Syndrome, which is a connective tissue thing. Those two combined…
Libby: …and he’s got Colitis too in his colon.

Alex: He’s always had this, so he doesn’t really complain because he doesn’t really know any different. In some ways that’s a good thing and in other ways it was really hard for us before he could talk as well as he can now. We had to just guess how he was feeling, or what was wrong or what hurts.

While communication with his parents has improved, it’s still a challenge to explain everything to his classmates.

As good as Landon is at keeping his spirits high, it’s a difficult lifestyle no matter how old you are. Recently, one particular moment showed just how hard it can be.

Alex: So he’s just crying and crying and I keep asking what’s wrong or what hurts, and he says “I don’t want to tell you.” I kept prying what’s wrong, and finally he says the reason “I’m crying is because every time we do something fun as a family, we have to leave early or we have to stop because of me. It’s how I feel, and we don’t get to do those fun things because of me.”

A few years ago, while in the process of researching Landon’s disease, Libby came across a support page on Facebook full of moms going through the same thing. Through there, she connected with one in particular named Annette whose son also has EOE.

Libby: One day she messaged me and said “Hey, I want to nominate Landon for a Kidd’s Kids trip.”

Created by the late radio host Kidd Kraddick in 1991, The Kidd’s Kids program helps children with life altering or threatening conditions travel to Walt Disney World with their family. Since its inception, the charity says it has supported over 1,000 kids and their families.

Libby: She said “I’d like to nominate Landon. My son and I went back when Kidd was still alive and you guys are such a sweet family and I want to nominate you guys.”

Two months later, the Carlsons received a letter in the mail; they had not been selected. Then a few weeks ago, the Carlsons hosted a game night with some family friends. During one of the games, Libby and Alex surprised their kids in a way they never saw coming. Landon and his family had just been chosen to go no Kidd’s Kids trip.

Libby: When we surprised him, we said to him “We’re getting to do this, Landon, because you’re special.”

Alex: We wanted to make sure he understood that the reason we’re doing this fun thing *is* because of him.

Libby: Because of you, we get to do this. We’d never as a family would get to do something like this. And he got really quiet, and he told me later he was trying not to cry.

Jesse: Because of you, your whole family gets to go. What’s that like?
Landon: I don’t know, the best thing that I could think of?

But what 7-year-old Landon doesn’t know is that the best is yet to come. 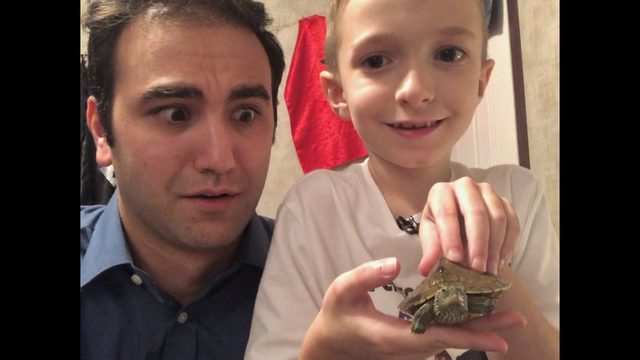 Kidd’s Kids – If anyone would like to donate towards the Kidd’s Kids charity or nominate a child for the next Disney trip they can go to their website below. https://www.kiddskids.org

“The last two are charities that have helped us so much with traveling expenses when we are going so far for Landon’s medical appointments. They can offer help to other families who have to travel for medical treatments as well.”

Children’s Miracle Network –TThey help assist families in Missouri, Kansas and Oklahoma with the cost of medications, special equipment, traveling expenses and more. To donate or apply for assistance you can go to this link: https://www.freemanhealth.com/give-to-freeman/financial-donations/services-and-funds-in-need/childrens-miracle-network-hospitals/4

Ronald McDonald House Charities – Ronald McDonald House provides a place for families to call home while they are traveling away from home with sick children so they can stay close by their hospitalized child at little to no cost. https://www.rmhc.org/ronald-mcdonald-house

Mexico homicide rate edges up in 2019; rate of rise slows

After tweaks, Trump trial format will be similar to Clinton

#1 Neosho knocks off #7 Carthage in "Black and Blue Brawl"