These are the best and worst days to fly around Thanksgiving

Thanksgiving week tends to draw major airport crowds. Coupled with inevitable weather delays and sometimes infrequent flyers, it can be a brutal time to travel. Not to mention, the conventional wisdom to fly on Tuesdays won’t necessarily save you much money.

But some days within Thanksgiving week are significantly busier than others. If you can afford to be flexible with your schedule, you’ll not only save money, but you might also avoid chaos.

The best and worst days to fly around Thanksgiving

NerdWallet analyzed the past three years of checkpoint travel numbers provided by the Transportation Security Administration, which tracks the number of passengers screened daily at U.S. TSA checkpoints.

In each of the past three years, the Sunday after Thanksgiving was the most crowded day to travel from the Friday before Thanksgiving through the Wednesday after.

As far as the least crowded? Thanksgiving Day itself. 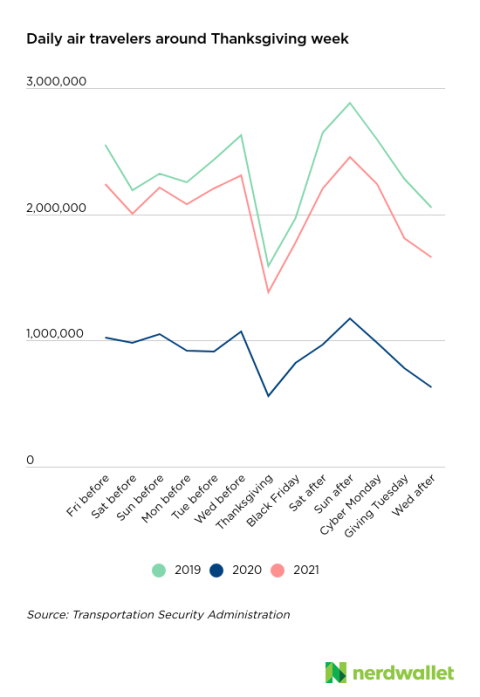 When averaging over the past three years, here were the most to least crowded days for Thanksgiving flying, ranked:

When broken out by pre- and post-holiday travel, here are the three least-crowded days to travel ranked from least to most crowded. Because they’re less crowded and likely less expensive, it makes them some of the best days to fly around Thanksgiving.

Why flying the Sunday after Thanksgiving is so terrible

By almost all metrics, the Sunday after Thanksgiving is pretty much the worst day of the year you could fly. In both 2021 and 2019, it was the busiest single day of the entire year in terms of U.S. passengers, based on TSA passenger data.

The post-Thanksgiving Sunday was not the busiest day of the year in 2020 because, well, you know why (2020’s most-crowded-day award went to Friday, Feb. 14, which preceded the Presidents Day weekend and pandemic-related travel restrictions).

But although 2020 holiday crowds were certainly lighter than usual, the trend of Sunday as a busy day still rang true. Over 2x more people passed through TSA on the Sunday after than those who passed through on Thanksgiving in 2020.

Here’s a numerical breakdown of crowds on Thanksgiving Day itself versus the Sunday after Thanksgiving for the past three years:

Beyond crowds, expect to pay big this year. The average round-trip domestic airfare for trips beginning between Nov. 20 and Nov. 24, 2022, is $350, according to travel booking app Hopper. That figure is 43% higher compared to flights taken during the same weekdays last year, and it’s 22% higher than 2019 prices. However, around that time frame, prices can swing wildly: The average domestic airfare for round-trip flights returning Sunday, Nov. 27, 2022, are $528 — a 51% increase above the average.

If you work a standard Monday-Friday workweek, with two days off for the holiday, then leaving Wednesday after work and flying home Sunday night might make sense to eliminate time off work. That’s the schedule most people follow, and if you join in then you’ll pay — both in terms of literal price but also airport crowds.

But if you can be a bit flexible, then avoid the Wednesday-Sunday itinerary and try these travel days instead.

Across travel days for the week before and after Thanksgiving, the holiday itself was the lowest-traffic day every year over the past three years. Book the first flight out for the day — a practice NerdWallet recommends anyway to reduce your odds of a flight delay — and you might even land in time for Thanksgiving dinner.

And according to flight data from travel search engine Expedia, traveling on Thanksgiving Day is also the cheapest day to fly within that period.

If you don’t mind extending your trip, the Wednesday after Thanksgiving was the second-least busy day in 2021 and 2020. Especially if you have the option of remote work, you might be able to avoid taking vacation days, despite the longer trip.

Even if you can’t stay through Wednesday, you’ll still save by flying out on Monday versus the Sunday after Thanksgiving. According to Hopper, domestic airfares average 17% cheaper to fly out on Cyber Monday versus flying out one day earlier.

It can also make sense to get your Thanksgiving celebrations started early by flying out well ahead of the day before. Expedia data found that average ticket prices for departures on the Monday before Thanksgiving are 15% cheaper than Wednesday departures. And in some cities, the difference is even starker. For example, average airfares for domestic flights to Las Vegas dropped from $550 for Wednesday arrivals to just $380 for arrival days earlier in the week, amounting to roughly 31% in savings.

If you must travel during the weekend, consider having Thanksgiving dinner at your own home and then flying somewhere on Black Friday, which is the third-least crowded day to fly on average. Hopper’s 2022 Holiday Travel Outlook said Black Friday fares average $175 less than fares for the weekend days after.

Consider it a great way to not only avoid airport crowds, but also retail crowds — as you won’t be out shopping.

The standard rules around the best (and worst) days to fly don’t necessarily apply. Coupling that with conventional wisdom around saving money on flights, flying for Thanksgiving might not be as painful a proposition as you once thought.

Drowning: Two dead at Lake of the Ozarks

The lighting of Sparkle in the Park in Carthage, Mo.

US stock indexes fall as lockdown protests spread in China