Rheumatoid arthritis affects 1 in 100 people worldwide. It causes inflamed, painful and swollen joints, often in the hands and wrists, and can lead to loss of joint function as well as chronic pain and joint deformities and damage. What causes this condition has been unknown. 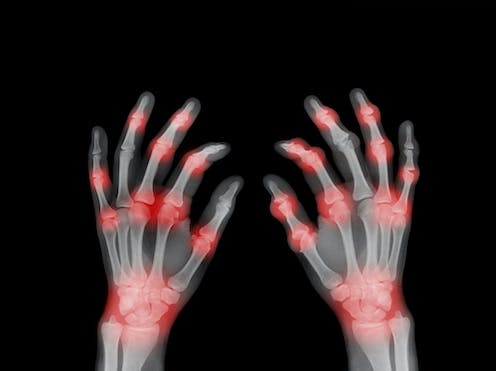 In our recently published study, my colleagues and I found an important clue to a potential culprit behind this disease: the bacteria in your gut.

Rheumatoid arthritis is an autoimmune condition, meaning it develops when the body’s immune system starts to attack itself. Proteins called antibodies, which usually help fight off viruses and bacteria, begin to attack the joints instead.

The origins of the antibodies that cause rheumatoid arthritis have been an area of study for many years. Some research has shown that these antibodies can start forming at sites like the mouth, lung and intestines over 10 years before symptoms arise. But until now, it was unclear why researchers were finding these antibodies in these particular areas.

We found that one previously unknown species of bacteria was present in the intestines of around 20% of people who were either diagnosed with rheumatoid arthritis or produce the antibodies that cause the disease. As a member of the Cherokee Nation of Oklahoma, I suggested we name this species Subdoligranulum didolesgii (“didolesgii” means arthritis or rheumatism in Cherokee) as a nod to the contributions that other Indigenous scholars have made to science as well as the fact that rheumatoid arthritis affects Indigenous people at a higher rate than other populations.

Subdoligranulum didolesgii has not been detected in the feces of healthy people before, and it is currently unknown how prevalent this bacteria is in the general population.

We also found that these bacteria can activate specialized immune cells called T cells in people with rheumatoid arthritis. T cells drive inflammatory responses in the body, and have been linked to the development of different autoimmune diseases.

These findings suggest that these gut bacteria may be activating the immune systems of people with rheumatoid arthritis. But instead of attacking the bacteria, their immune system attacks the joints.

To confirm our hypothesis, we gave mice an oral dose of Subdoligranulum didolesgii and monitored their reaction. Within 14 days, the mice began to develop joint swelling and antibodies that attacked their joints.

The future of rheumatoid arthritis treatment

It’s important to note that antibiotics are unlikely to be helpful treatment for the microbiomes of patients with rheumatoid arthritis. Although Subdoligranulum didolesgii may be triggering an autoimmune response for some people with rheumatoid arthritis, antibiotics eliminate both helpful and harmful bacteria in the gut. Additionally, removing the bacteria won’t necessarily stop the immune system from attacking the joints once it has started.

Nevertheless, we believe that these bacteria can be used as tools to develop treatments for rheumatoid arthritis and hopefully ways to prevent disease from happening in the first place.

Meagan Chriswell does not work for, consult, own shares in or receive funding from any company or organization that would benefit from this article, and has disclosed no relevant affiliations beyond their academic appointment.

Santa is back! Tipster and KOAM report leads to recovery

Fugitives from Justice, two from Cherokee County Sheriff’s Most Wanted