That’s how much insurance fraud costs every American a year — $309 billion in total, according to the findings of a recent research study that I led. For a family of four, that adds up to nearly $3,800 — about enough to finance a small family vacation.

This additional cost comes from increased premiums that consumers have to pay to help offset the cost of fraud to the insurance industry. Yet despite the incredible financial impact on the average consumer, the research also suggests that almost half of Americans feel that it is an “acceptable” type of crime. 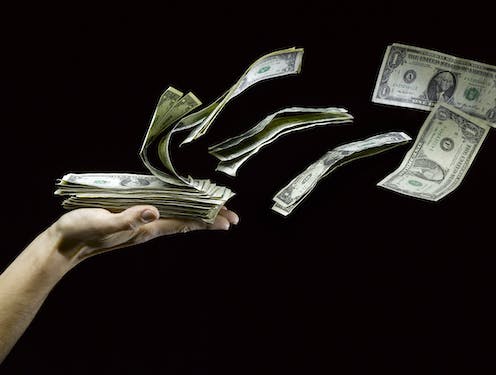 The way insurance claims are processed makes the system a very easy target for scammers. Jeffrey Coolidge/Stone via Getty Images

This little-known type of fraud comes in many forms, such as misrepresenting facts on an insurance policy to receive a lower premium. This would involve not disclosing additional drivers in the household, understating the miles driven per year and using an address that is in a lower-premium and -risk neighborhood.

Another example is a patient exaggerating an injury in the hopes of gaining additional benefits, such as better medical treatment, additional time off from work due to disability and even attempting to get an injury covered that was not part of an auto accident. Besides resulting in inflated bills that others ultimately pay for, the fraudulent claims clog up an already busy and stressed medical system, which could potentially take valued treatment away from a patient who does need it.

Insurance fraud also involves large-scale organized fraud whereby organized international criminal groups and terrorist cells launch highly detailed campaigns targeting specific insurance carriers. In the past, organized criminal rings would focus on crimes such as kidnapping, drugs and extortion as a means to fund their organizations. My colleagues and I found, however, that most of those groups have moved to insurance fraud because it is much less dangerous, the payout is greater and the punishment is low or nonexistent.

The fact that insurance fraud is high reward, low risk is what makes it stand out among other types of fraud.

There are dozens of other kinds of scams that fraudsters engage in, all with the goal of either gaining a monetary profit or securing valuable personal information for use in other identity theft schemes. From romance and travel scams to schemes related to work or COVID-19, these all have the same “fraud DNA” of using psychological tricks to manipulate.

But the nature of the insurance system, with many gaps in how claims are processed, makes it a very easy target and creates additional opportunities to commit fraud.

In addition, it’s a crime that receives very little media and prosecutorial attention. From a legal perspective, insurance fraud cases often move to the bottom of the priority list of law enforcement and prosecutors, which is why fraudsters are so tempted by this type of crime.

And given how easy this fraud is to commit, how acceptable it seems to many Americans and how hard it is to detect, the level of insurance fraud in the U.S. is only expected to grow.

Michael Skiba does not work for, consult, own shares in or receive funding from any company or organization that would benefit from this article, and has disclosed no relevant affiliations beyond their academic appointment.

Drowning: Two dead at Lake of the Ozarks

Crews rescue 2 from plane caught in power lines in Maryland

14 years on, NATO to renew a vow to Ukraine

City to hold vigil honoring those killed in Walmart shooting