How Have Point and Mile Values Changed Over the Pandemic?

Emerging from a global pandemic has been a weird mix of realizing that though not much has changed, a lot feels different. Perhaps nothing more so than travel.

We can probably all agree that last year was an anomaly. In travel, demand was so low that airline and hotel room prices plummeted. In response, travel loyalty programs tested various incentives to keep up interest, including lowering elite status requirements and letting members turn unused travel funds into points.

Did all of that jiggering impact the value of the points and miles that travelers have still been collecting? Have hotels and airlines started charging more points for award bookings now that many people are sitting on much larger troves of points?

To find out, we collected real-world data on thousands of flights and hotel stays, comparing cash prices and award prices to determine the average value of each loyalty program’s points. Here’s what we found. 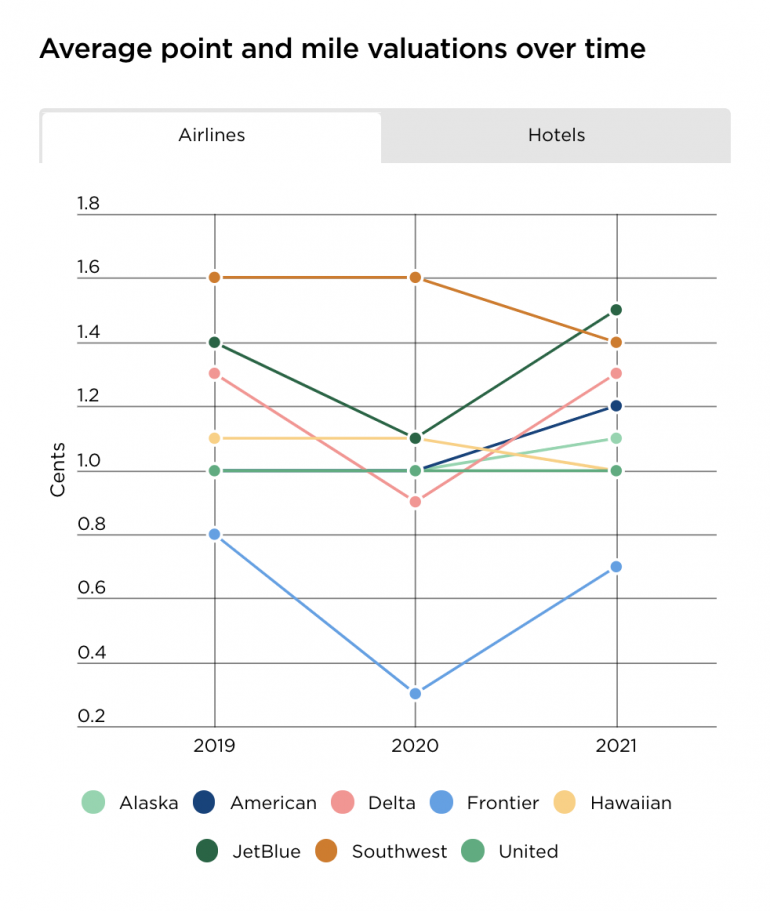 Overall, airline miles increased in value slightly since 2020, with one notable exception: Southwest. We determined that the average value of a mile in 2021 is 1.2 cents.

Two programs, Delta and JetBlue, have returned to or exceeded pre-pandemic levels with their latest valuation. These miles are also valued higher than the average, at 1.3 and 1.5 cents per mile, respectively, outperforming legacy carrier competitors like United and American.

The value of Frontier’s miles more than doubled in the past year, though it still lags behind the value of other full-service airlines’ miles.

Southwest’s devaluation is the big exception this year. As of last year, Southwest was beating out the competition by 0.5 cent or more per mile, but this is no longer the case. After encouraging Rapid Rewards members to convert their travel funds to Rapid Rewards points last year, the airline devalued its points in early 2021, dropping from 1.6 cents per point to 1.4 cents. 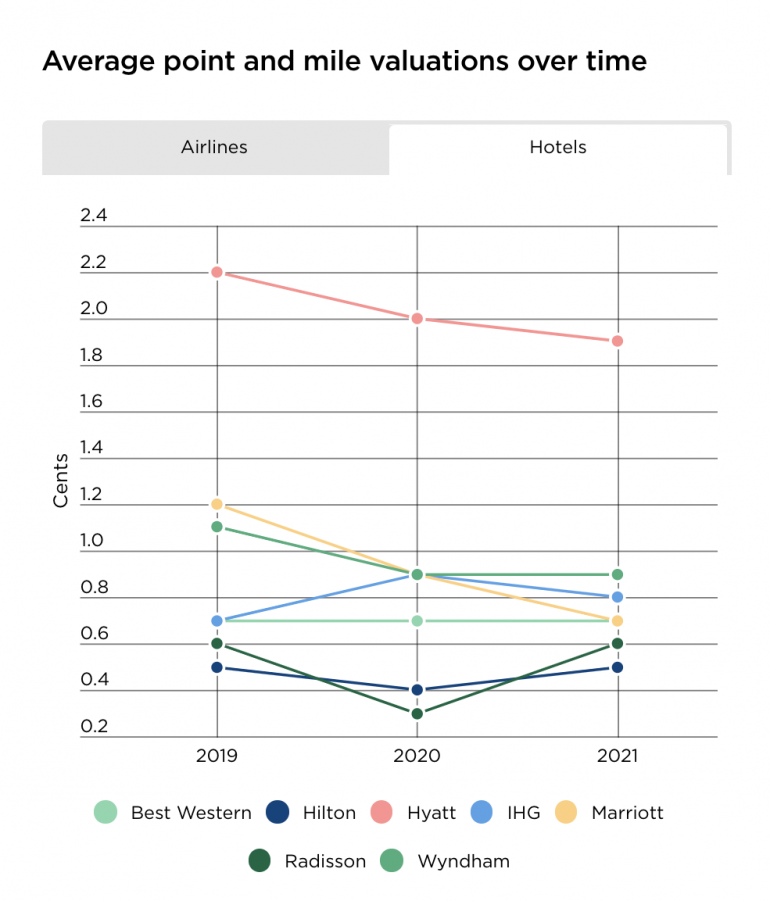 Generally speaking, valuations have slightly declined or stayed the same for hotel loyalty programs. Most hotels’ points lost just 0.1 cent in value since 2020, and Hyatt remains the most valuable hotel points currency by far.

Of the hotel brands we analyzed, Marriott has had the biggest decline during the pandemic. In 2019, the last “normal” year, Marriott had the second-highest valuation, at 1.2 cents per point. Today, it’s worth just over half of that, sitting at 0.7 cent per point, and now tied for fourth with Best Western.

While the cash prices for Marriott dropped during the pandemic and continue to remain low, award pricing hasn’t dipped nearly as much. Marriott also started using peak and off-peak award pricing in September 2019, so that has likely contributed to bringing down its baseline value.

On the other hand, Radisson’s points valuation has recovered to pre-pandemic levels — it doubled in value to 0.6 cent this year, matching its 2019 valuation. Radisson’s “new normal” is actually just … normal.

My points are worth less. What do I do now?

There are a few things to consider with the latest valuations.

If you’re reassessing your airline loyalty or thinking about opening a new credit card, you might want to check the valuations and do some comparisons. For example, some hotel credit cards may offer high sign-up bonuses, but when you do the math, even 100,000 points might not be worth very much if the value of those points is low.

You might not need to make any drastic changes to your travel rewards strategy. It’s inevitable that points and miles devalue over time, so it’s important to use them consistently enough that you don’t lose a lot of value. It’s almost the opposite of investing, when you try to leave money invested for longer periods to get more value.

That’s not to say that you should recklessly drop thousands of points on travel tomorrow. You’ll still want to do cash and award pricing comparisons, similar to the ones we did to calculate these values: Divide the cash price by the number of points needed to book that same room or flight, and make sure you’re getting at least the average valuation that we found.

If you book travel with points and miles

No matter what the valuation is, you can still find some redemptions that offer even more value for your points, especially in programs that have an award chart.

The article How Have Point and Mile Values Changed Over the Pandemic? originally appeared on NerdWallet.

Rules sought for little-known practice of 'gooning.' What is it?

Independence Officials ask residents to cut back on water usage

Killings of 5 men in California are related, police say