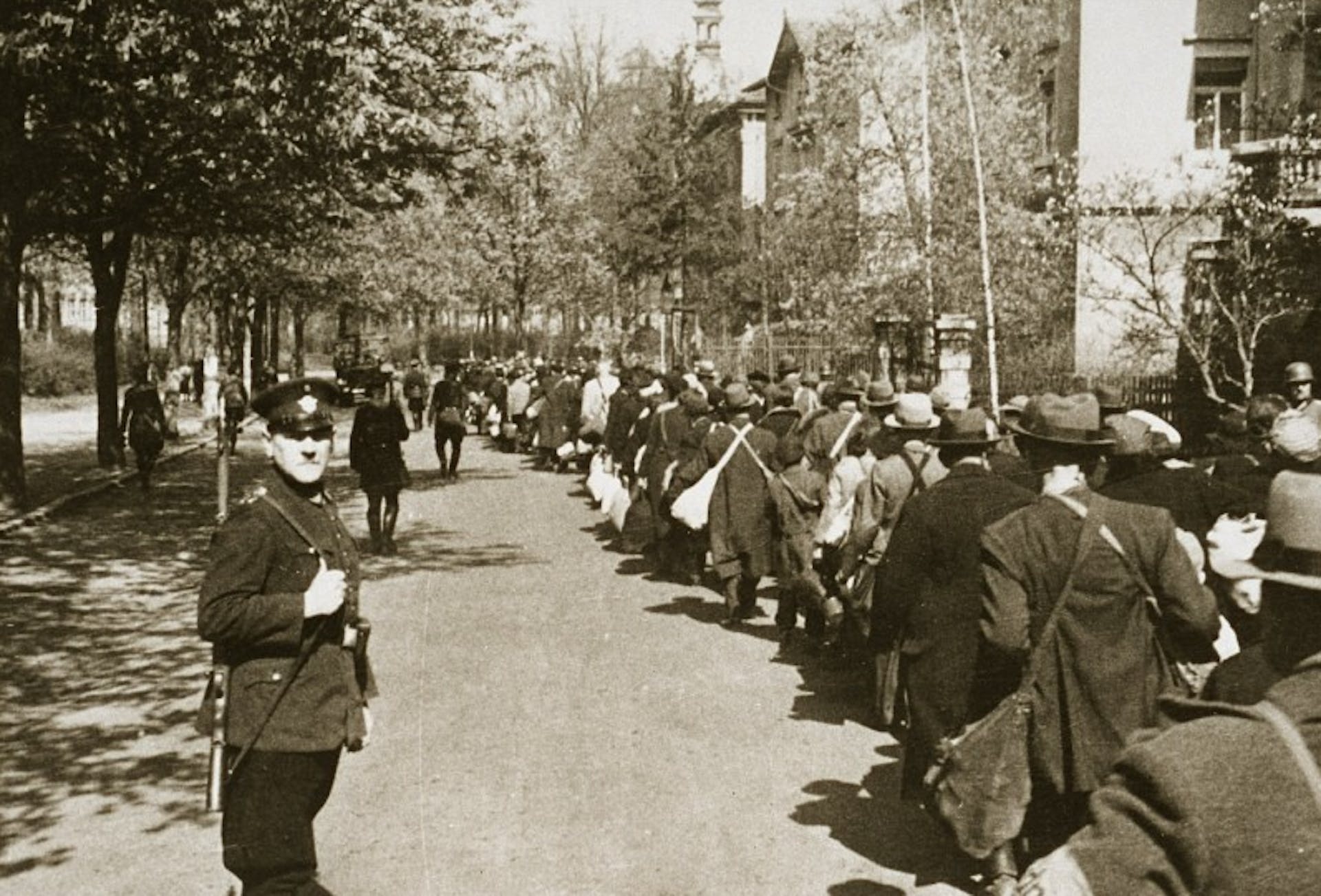 Jewish deportees march through the German town of Würzburg to the railroad station on April 25, 1942. US Holocaust Memorial Museum, courtesy of National Archives and Records Administration

The summer of 2022 marked the 80th anniversary of the first Nazi deportation of Jewish families from Germany to Auschwitz.

Although the Nazis deported hundreds of thousands of Jewish men and women, for many places where those tragic events happened, no images are known to document the crime. Surprisingly, there’s not even photographic evidence from Berlin, the Nazi capital and home to Germany’s largest Jewish community.

The lack of known images is important. Unlike in the past, historians now agree that photographs and film must be taken seriously as primary sources for their research. These sources can complement the analysis of administrative documents and survivor testimonies and thus enrich our understanding of Nazi persecution.

As a historian originally from Germany and now teaching in the U.S., I have researched the Nazi persecution of the Jews for 30 years and published 10 books on the Holocaust.

I searched for unpublished images in all the archives I visited during my research. But I have to admit that I – along with many of my colleagues – did not take the gathered visual evidence seriously as a primary source and rather used it to illustrate my publications.

During the past decade, scholars have realized how pictures can contribute to our understanding of mass violence as well as the resistance to it. Some can provide the only evidence we have about an act of persecution – for example, a photograph of anti-Jewish graffiti. Others will reveal additional details, as in the image of a court proceeding against anti-Nazi resistors.

Photographs are now in some cases the sole objects of scholarly inquiry. They are used to identify perpetrators and victims in specific cases, when other sources would not reveal them.

Here’s one example: An image shows uniformed Nazis standing in front of a passenger train filled with German Jews in Munich on Nov. 20, 1942. Who were those men? More importantly, what are the stories of the barely recognizable victims behind the windows in this image? 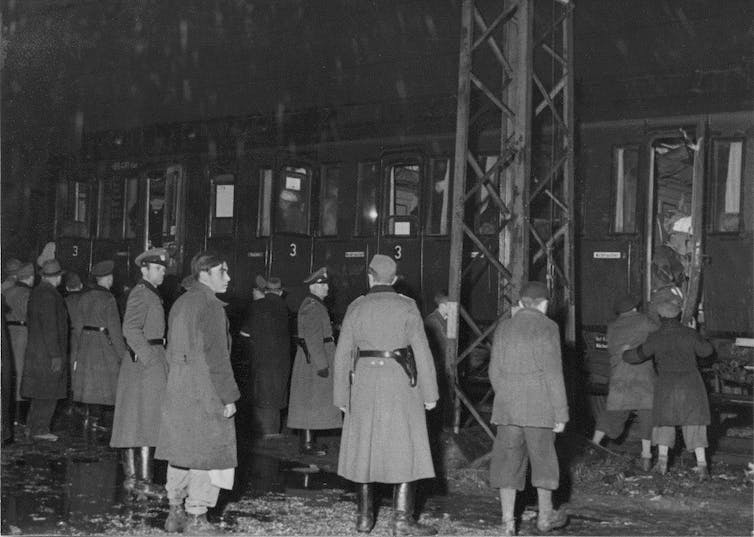 Between 1938 and 1945, more than 200,000 people were deported from Germany, mainly to ghettos and camps in Nazi-occupied Eastern Europe.

To make pictures of Nazi deportations accessible for research and education, a group of university, educational and archival institutions in Germany and the Dornsife Center for Advanced Genocide Research at the University of Southern California launched the #LastSeen Project — Pictures of Nazi Deportations in October 2021.

This effort aims to locate, collect and analyze images of Nazi mass deportations in Germany. The deportations started with the forced expulsion of around 17,000 Jews of Polish origin in October 1938, right before the widespread antisemitic violence of Kristallnacht, and culminated in the mass deportations to Nazi-occupied Eastern Europe between 1941 and 1945.

The mass deportation targeted not only Jews, but also people with disabilities as well as tens of thousands of Romani. 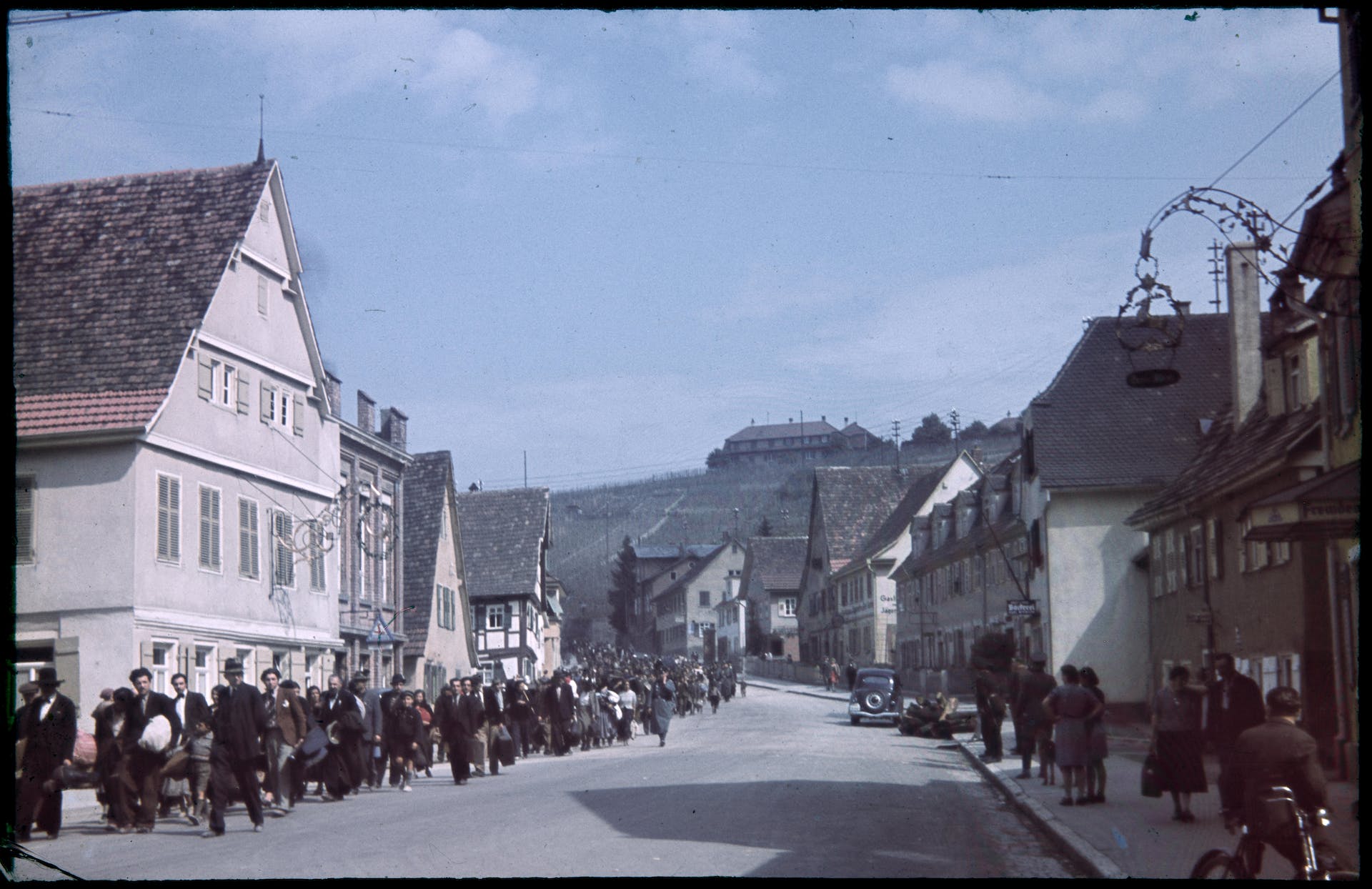 What can we learn from the pictures? Not only when, where and how these forced relocations took place, but who participated, who witnessed them and who was affected by the persecution acts.

I work with the USC Dornsife Center for Advanced Genocide Research to manage the outreach for the #LastSeen Project in the English-speaking world. The project has three main goals: first, gathering all existing pictures. These images will then be analyzed to identify the victims and perpetrators and recover the stories behind the pictures. Finally, a digital platform will provide access to all the images and unearthed information, both enabling a new level of study of this visual evidence and establishing a powerful tool against Holocaust denial.

When the project began, the partners were skeptical of whether we would find a significant number of never-before-seen images of mass deportations.

But after addressing the German public and querying 1,750 German archives, within the first six months of the project we received dozens of unknown images, more then doubling the number of German towns, from 27 to over 60, where we now have photographs documenting Nazi deportations.

Many of these photos had collected dust on shelves in local archives in Germany, and some were found in private homes. In the future, the project hopes for discoveries in archives, museums and family possession in the U.S. and the U.K., but also in Canada, South Africa and Australia. We know that liberators took photographs with them from Germany at the end of the war, and survivors received them later via various channels.

The project has already located photos in the United States. In two cases, survivors had donated them to archives, which project staff learned during research visits. Simon Strauss gave an image to the U.S. Holocaust Memorial Museum depicting the deportation in his German hometown of Hanau. He wrote on it, “Uncle Ludwig transported.” The second photo was at the Leo Baeck Institute in New York, which had received the hitherto only known picture from the Nazi deportation of the Jews in Bad Homburg.

To locate more photos, the project counts on the help of ordinary citizens, researchers, archivists, museum curators and survivors’ families.

After joining the project, I searched the USC Shoah Foundation Visual History Archive, which holds over 53,000 video testimonies of Holocaust survivors. Many of the Jews who gave testimony talked about Nazi deportations. All interviewees shared photographs. While many of these more than 700,000 images are artifacts of personal value, such as family and wedding photos, some images depict Nazi persecution.

Within minutes of my search using the term “deportation stills” I was staring at photographs showing a Nazi deportation in a small town in central Germany. At the end of his 1996 interview, Lothar Lou Beverstein, born in 1921, shared two photographs from his hometown of Halberstadt that he had received from friends after the war. Beverstein identified his father, Hugo, and his mother, Paula, in an image showing Nazis lining up deportees in front of the city’s famous 13th-century Gothic cathedral. 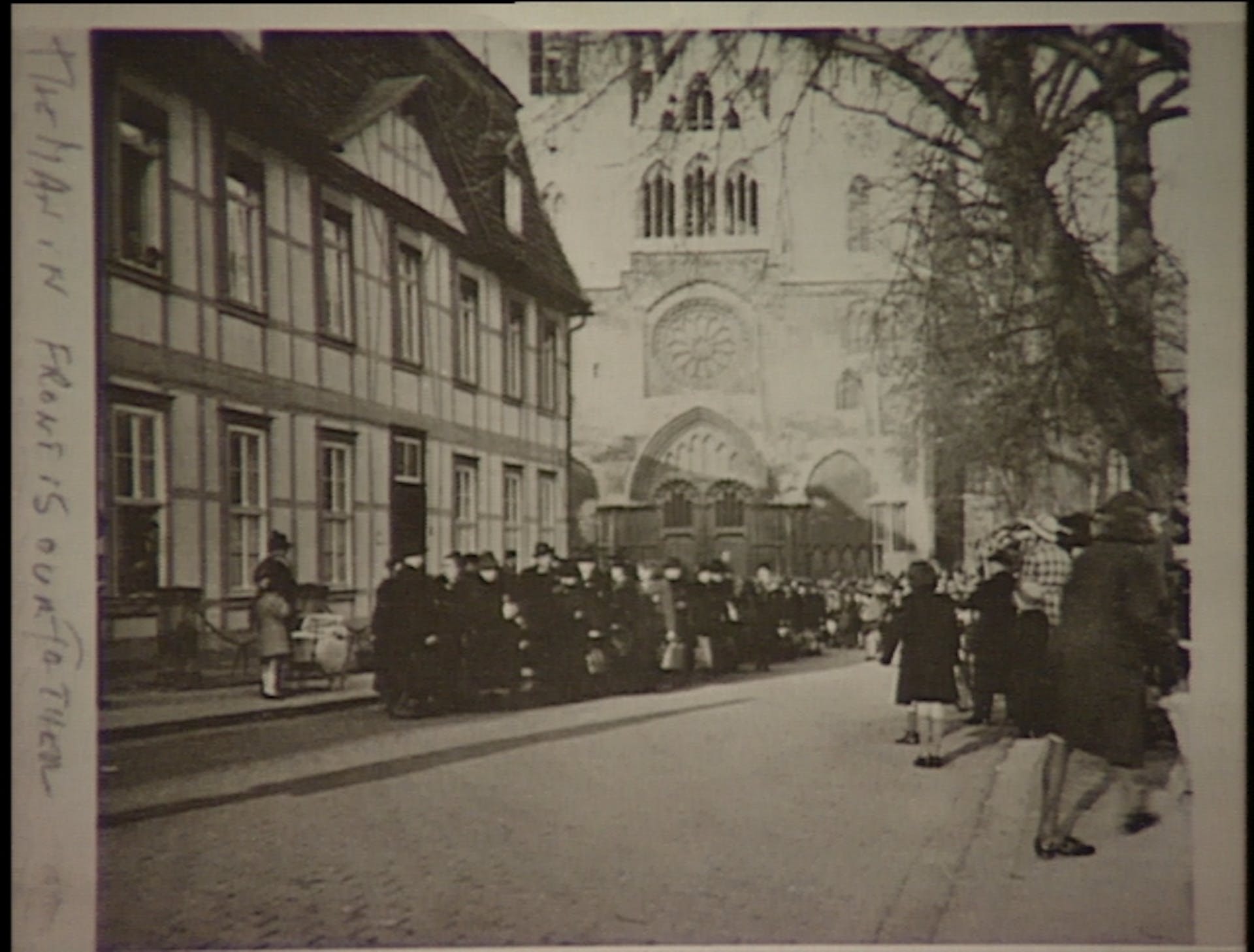 Both of Lou Beverstein’s parents were deported to the Warsaw Ghetto on April 12, 1942. In his interview, Beverstein declared that to his knowledge nobody survived from that transport, which supposedly consisted of 24 men, 59 women and 23 children. Now the project needs to locate Lou Beverstein’s family in the United States or connect to other descendants from Halberstadt to find out more about the origins of the images and the identities of the deportees depicted in them.

The identities of deportees and perpetrators in the existing images are often unknown. Most photographs show groups of victims whom project staff aim to identify so they and their stories can be acknowledged. This is very difficult, since there are seldom close-up shots. 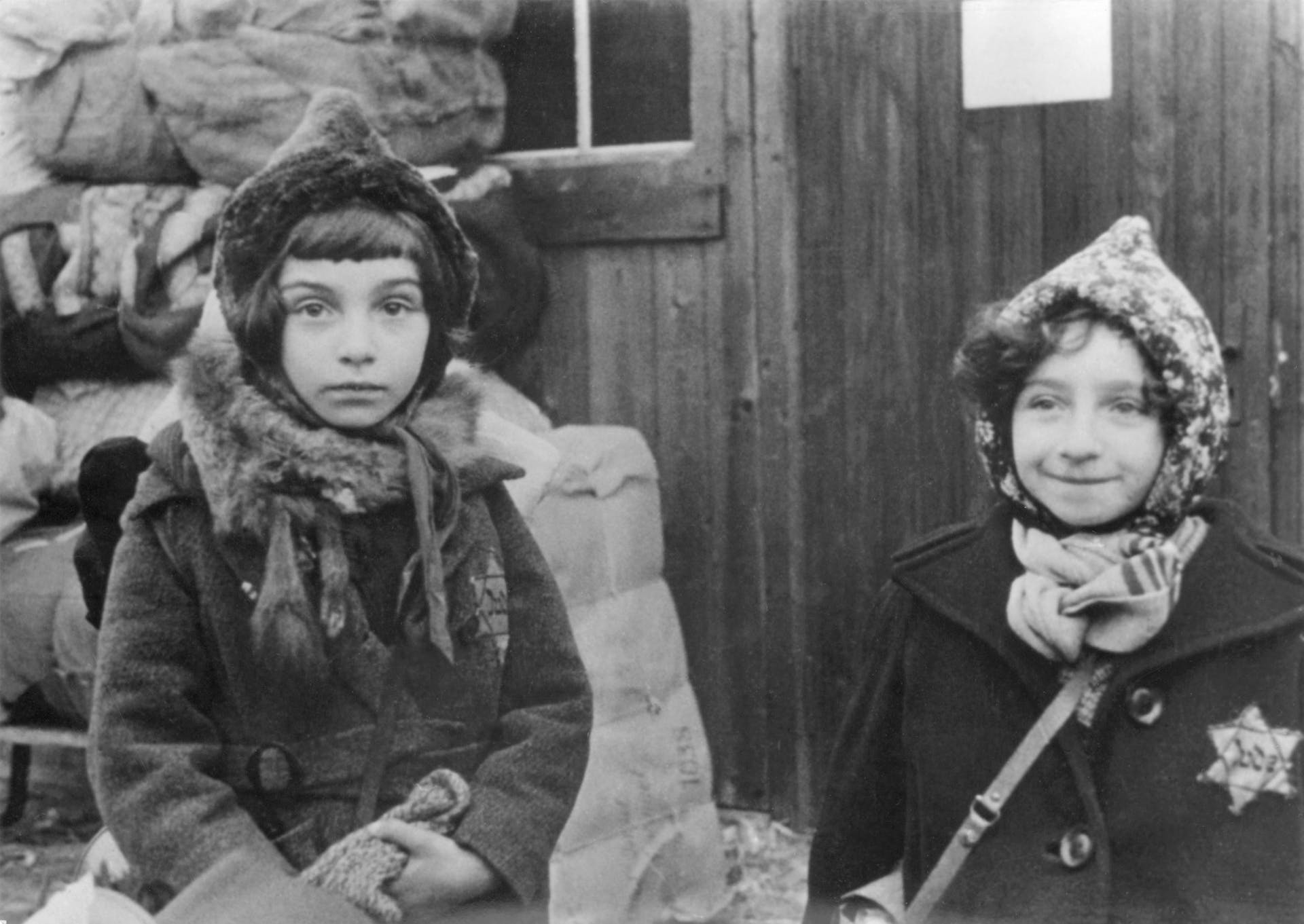 Even in a photograph clearly showing two Jewish girls, we do not know anything other than that the Gestapo deported them to Kowno with the same transport depicted in the image showing Munich Jews being deported referenced at the beginning of this article. The nearly 1,000 deportees from Munich were shot soon after they arrived at their destination in Nazi-occupied Lithuania.

This is but one example of how scholars desperately need the public’s help to recover the stories of countless unidentified victims of the Nazis.

Wolf Gruner directs the USC Dornsife Center for Advanced Genocide Research, which is a partner institution in the LastSeen project.

Rules sought for little-known practice of 'gooning.' What is it?

Where do you go when your nation vanishes underwater?

Florida deaths rise to 47 amid struggle to recover from Ian